A Brief History of the Anderson Hardware Store by Joyce Anderson Halver and Owen T. Anderson

We believe that Mike Schneider operated a hardware store in this building until he sold the business, but not the building, to Russell Rumerich on or before 1935. Oscar (O.T.) Anderson took over and moved his hardware store into the building in 1942. O.T.'s first store was originally in the west half of the former Adams Furniture Store on Lot 8 Block 13 where he started in September, 1929, buying the business from Wagner and Knutson.

Edward Anderson (O.T.'s youngest brother) began working in the store in the late 1930's. He worked there until 1942 when he entered the Army Air Corps where he was a sheet metal instructor at Chanute Field, Illinois. Gordon Elliot, another employee also entered the Army serving in the Army Corp of Engineers. He was seriously injured in a jeep accident in North Africa and spent several months recovering in Walter Reed Hospital. He returned to Adams when he was released from the hospital.

The war years were challenging for the store as they were for everyone. When Edward and Gordy went into the service O.T. and Oscar Benson were left to operate the business. Much of the merchandise sold in hardware stores at that time was unavailable as the needed materials to manufacture domestic goods went into the "war effort." The OPA (Office of Price Administration) required a pre-war price list of all merchandise to be posted by the door. It put price caps on all merchandise as a measure to prevent price gouging and inflation. Mrs. O.T. (Helen Bohn) was called in to do the bookkeeping each day after working full-time at the Farmer's State Bank in her pre-war secretarial position after two younger single women left to work in defense (war) plants. As young teenagers we did what we could to help at the store and at home. With rationing of many staples such as sugar, meat, shoes, coffee, gas, tires (if and when they were available), and a 35 mph speed limit life was different for us all. With four and a half million Americans in the service everyone on the home front worked wherever they were needed.

When Edward returned from the service in 1945 he became a partner with O.T. in the business. The store was then remodeled and became affiliated with Marshall Wells Stores in 1946. In the summer of 1949 there was a fire in the back room. Gordon Elliot, who worked as a plumber out of the store, was refueling the gasoline fired lead melting pot when a fire broke out. Boxes of unopened merchandise ignited and the room was soon engulfed in flames. The fire spread to the basement as the gasoline leaked through the floor. The volunteer fire department quickly responded from half a block away and confined the blaze to the back room and basement. There was however considerable smoke and fire damage leading to a "real" fire sale. Gordy was quite seriously burned and was taken to LeRoy for medical treatment.

In a later remodeling, the front part of the basement was finished and used as a display area for major appliances. This included building a stairs to the lower level along the west wall of the store. The formal opening of the new space was on April 1, 1962. A new lower ceiling was installed about 1965 and the central stairway to the lower level was put in later to more easily access an expanded display area downstairs. O.T. retired on January 1, 1965 and Edward became the sole operator of the business. He purchased the building from O.T. in 1974. 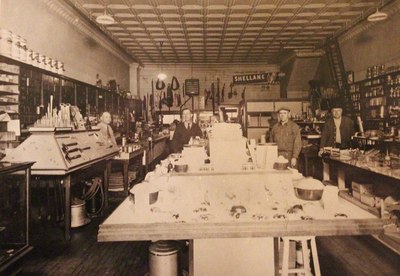 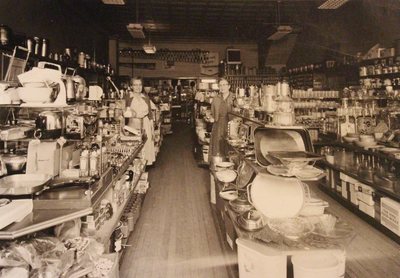 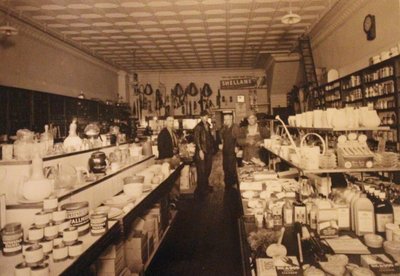